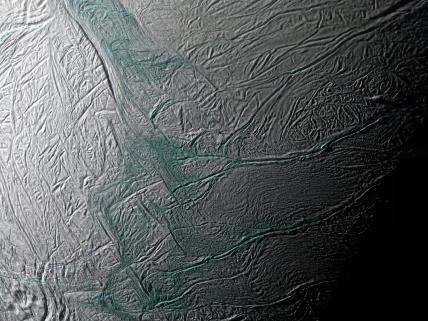 This false-color mosaic shows that coarse-grained and solid ice are concentrated along valley floors and walls, as well as along the upraised flanks of the "tiger stripe" fractures, which may be covered with plume fallout that landed not far from the sources. Elsewhere on Enceladus, this coarse water ice is concentrated within outcrops along cliff faces and at the top of ridges. The sinuous boundary of scarps and ridges that encircles the south polar terrain at about 55 degrees south latitude is conspicuous. Much of the coarse-grained or solid ice along this boundary may be blocky rubble that has crumbled off of cliff faces as a result of ongoing seismic activity. This mosaic complements the imaging coverage acquired during Cassini's July 2005 flyby of Enceladus."

The Eagle Prepares to Land

One Day On Pluto (and Its Moon Charon)
2008-09-03
This quality page is being brought to you ad free, putting the focus on content. Thank you for visiting NerdBeach!