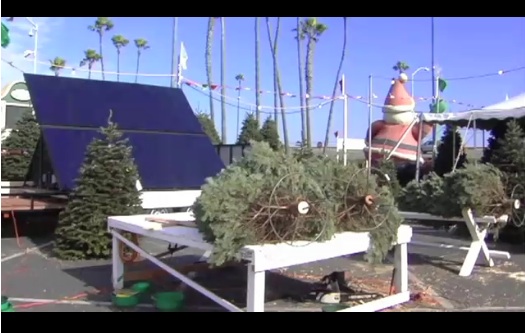 Most people do not relate solar power to the idea of a Christmas Tree. In fact, it is often thought that holiday decorations actually waste energy (and you Scrooges know who you are). But Stellar Solar just might change your view on the matter.

Teaming up with the Purdy Farms Christmas Trees, the innovative solar power company provides the energy expertise to power the tree lot's lights and power equipment. The energy comes from a giant mobile photovoltaic (PV) solar panel at the lot site. With luck, this might start a trend for all kind of seasonal and small businesses. Besides, it would seem that having a mobile power source is not only easier on the planet, but it eliminates the need for a power feed at the site. Everyone wins.

Solar power is the conversion of sunlight into electricity. Sunlight can be converted directly into electricity using photovoltaics (PV), or indirectly with concentrated solar power (CSP), which normally focuses the sun's energy to boil water which is then used to provide power. Other technologies also exist, such as Stirling engine dishes which use a Stirling cycle engine to power a generator. Photovoltaics were initially used to power small and medium-sized applications, from the calculator powered by a single solar cell to off-grid homes powered by a photovoltaic array.