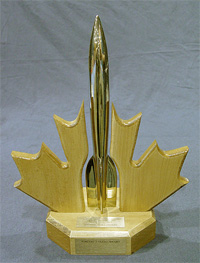 Who said fan fiction was not quality?

Hugo Awards, named after the Amazing Stories editor Hugo Greensback, are given out once a year for the best Science Fiction or Fantasy works of the year before.  This has been going on since 1953, and the latest nominees for 2008 have just been announced. In the Best Dramatic Presentation, Short Form category, we have Star Trek: New Voyages: "World Enough and Time" on the ballot, along with Battlestar Galactica "Razor", Doctor Who "Blink", Doctor Who "Human Nature" / "Family of Blood", and Torchwood "Captain Jack Harkness".

This shows that is not only the spirit the Star Trek is alive, but that it is gaining some respect out there.  The New Voyages are fan works that rebuilt the sets from scratch and made new adventures.  The effort has received some official kudos, with George Takei (TOS's Sulu) and others even playing parts.  For more information, and to watch the shows, go to www.StarTrekNewVoyages.com.

To be honest, I am quite pleased with all of the nominees.  The New Voyages are fun, Doctor Who is always pleasing, Torchwood is a great swashbuckling XFiles, and Battlestar Galactica is sure to entertain and intrigue.  At this point I really do not have a favorite in this category, but if the New Voyages win it would give a good shot in the arm to more Trek, which is always wonderful. (When it comes it Trek I have never been one of those "less is more" mongers).

More details about the nominees:

Lego Star Trek – All Hands on the Bridge

The Star Trek Experience has now boldly went
2008-04-21
This quality page is being brought to you ad free, putting the focus on content. Thank you for visiting NerdBeach!