The Dark Side of the Moon Topographic Map

Well, if we ever do meet on the dark side of the moon, I think I would like to take the topographical map recently created by the LRO spacecraft. The Global Lunar DTM 100 m topographic model (GLD100, for short) shows the hidden side of the moon in enough detail to plan a good landing or at least give a great appreciation of our only satellite's backwards face.

The image was created using a pixel scale of about 75 meters, and was created using the differences in stereo images taken via two Narrow Angle Cameras (NAC) and a WAC. The map used over 69,000 WAC stereo models, and it covers the moon from 79 degrees south to 79 degrees north, or 98.2% of the entire lunar surface. In other words, more than enough detail to avoid getting lost on the dark side of the moon. 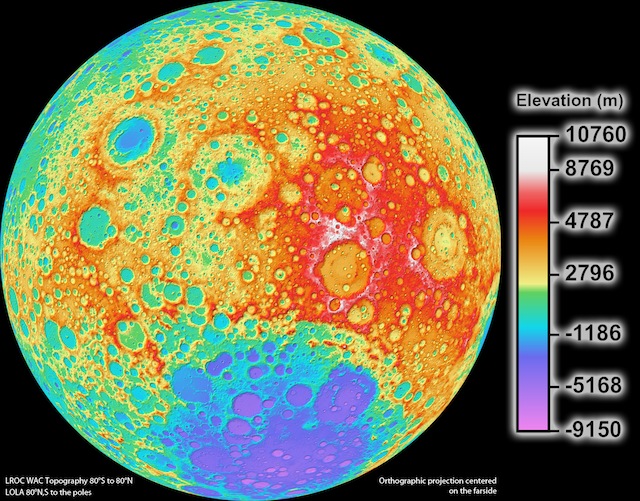 The Far Side of the Moon

The far side of the Moon is the lunar hemisphere that is permanently turned away, and is not visible from the surface of the Earth. The far hemisphere was first photographed by the Soviet Luna 3 probe in 1959, and was first directly observed by human eyes when the Apollo 8 mission orbited the Moon in 1968. The rugged terrain is distinguished by a multitude of crater impacts, as well as relatively few lunar maria. It includes the second largest known impact feature in the Solar System, the South Pole-Aitken basin. The far side has been suggested as a potential location for a large radio telescope, as it would be shielded from possible radio interference from Earth. To date, there has been no ground exploration of the far side of the Moon.

A Lunar Flower Created By Unknown

The Eagle Prepares to Land

Dark Clouds of the Carina Nebula
2011-11-21
This quality page is being brought to you ad free, putting the focus on content. Thank you for visiting NerdBeach!