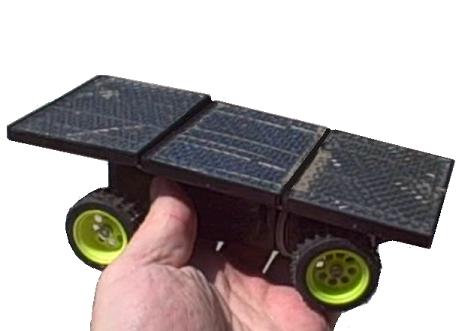 This Nerd Beach Exclusive is a very quick project in building a solar powered rover.  The main items you need will be a small electric powered car chassis and small solar cells, depending on what you can find.  The solar cells we used were very low efficient (i.e. cheap), but by putting three of them together the voltage was sufficient to drive the single motor.  The cells are connected in series, and wired to the battery ground and the existing power switch. 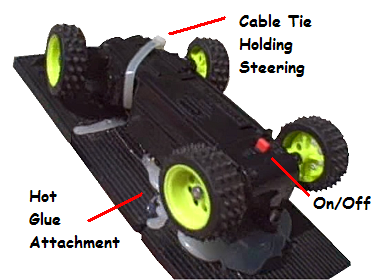 In constructing the solar rover the decision was made to go for speed of assembly rather than finesse, so hot glue was chosen as the construction medium of choice.  The solar cells were laid down on their face and hot glued together from the back, and the wires were attached as needed.  The donor chassis (containing motor, wheels, and switch ) was then laid on solar panel array and hot glued to it. 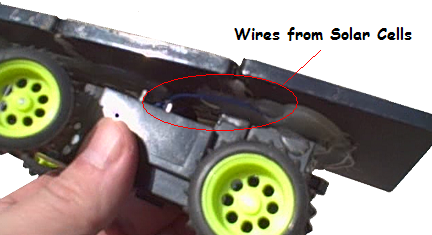 Once that was done a wire tie was ran around the chassis and steering arm.  This  was used to force the steering into a turn position.  The ideal is that we could set the car down in the sun and the car would run its circular course until the sun went down without supervision (did we mention that this was to be a fast project?). 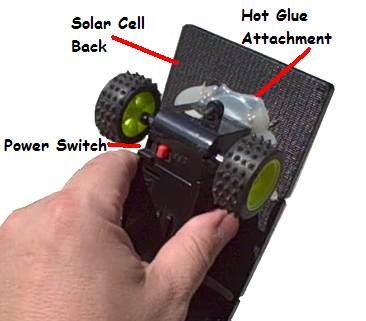 After that was complete, we let the glue set up for a few more minutes, then tried it out.  The rover worked great, and we left it running for a few hours, occasionally setting it back on course as it would drift occasionally on the cracked cement we happened to use as a test area.  The video below shows the rover in action.

The project worked out quite well, and the cool thing is that it uses no external power, all you need is good sunlight and a flat place to run her.  The rover uses a very simple circuit, as you can see from the schematic below. 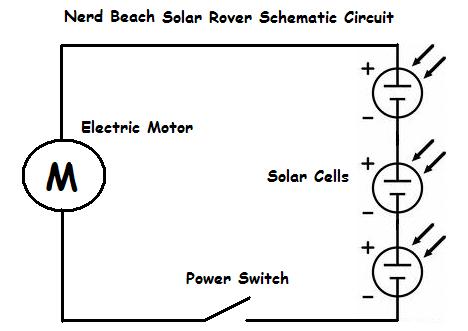