Is there water flowing on our closest planetary neighbor, Mars? While this is debatable, a couple images released from NASA may convince you that there is indeed flowing water on the Red Planet, albeit a highly seasonal one. Let's look at the evidence.

The first image shows what appears to be a fresh deposit in a crater in the Centauri Montes Region. The deposit appeared somewhere between August 1999 and September 2005. The new feature is several hundred meters long, and could be evidence of a gully flow. 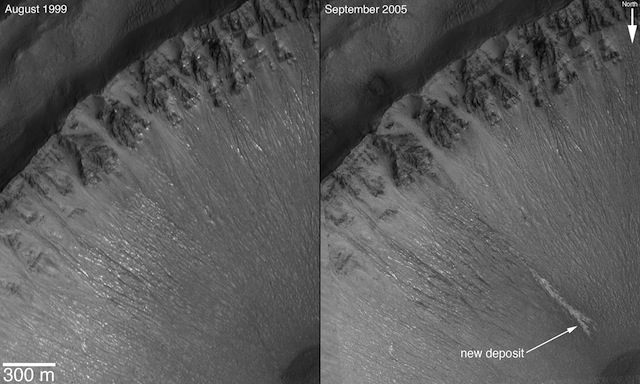 The next image shows fresh evidence of a potential gully flow that deposited residue on the surface between 2001 and 2005. Interesting to note that the location in 2001 appears to show evidence of previous flow activity, and the later image clearly shows the result of something happening in the area exactly as you would expect. This was in a crater in the Terra Sirenum area. 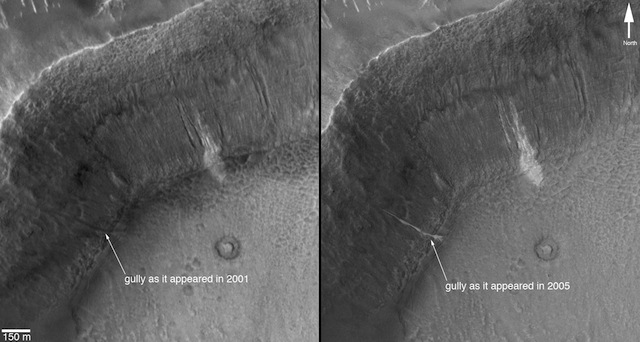 Hopefully one day we we know the answer to the mystery of ground flowing water on Mars. In the meanwhile, it is entertaining to explore the latest public images from NASA and look for evidence to prove or disprove the theory. Personally I think that any certain proof of flowing water that NASA had acquired would be quickly released to the public in order to get the funding flowing to NASA for a manned mission. Well, we can hope, anyway – that manned mission is way overdue.

Curiosity On The Way

The Mars Science Laboratory, named Curiosity, launched on 26 November, 2011, and plans reach Mars in August 2012. It is larger and more advanced than the Mars Exploration Rovers, with a movement rate of 90 m/h. Experiments include a laser chemical sampler that can deduce the make-up of rocks at a distance of 13 m.

Morning Frost on the Surface of Mars

Explore Mars and the Curiosity Rover Through a Panorama

Has NASA Found Irrefutable Proof of Water on Mars?

NASA’s Phoenix Mars Lander Sends Back First Arctic Photo
2011-12-03
This quality page is being brought to you ad free, putting the focus on content. Thank you for visiting NerdBeach!