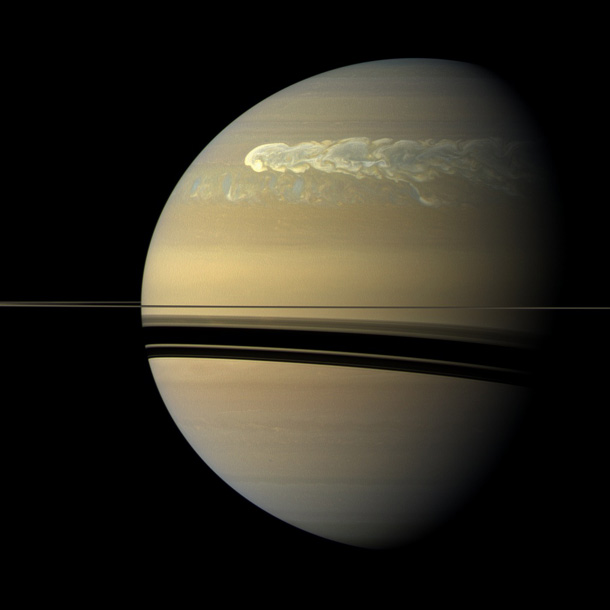 It was in late 2010 that an amateur astronomer happened to notice something on Saturn that did not seem to fit – an odd white spot that was growing in size. Through more monitoring and research, it was determined to be a storm that was soon larger than the Earth. In February 2011 the Cassini spacecraft circling Saturn was able to snap a picture of the disturbance, which by then had encircled the planet. The length at that time was estimated to be 180,000 miles (300,000 km) – or in other words, 3/4 the distance from the Earth to the Moon.

The image above shows the storm in false coloring for details. Comprised of 84 separate images, the color scheme is as follows: red is the deepest, yellow/green is the middle, and blue/white is the highest. 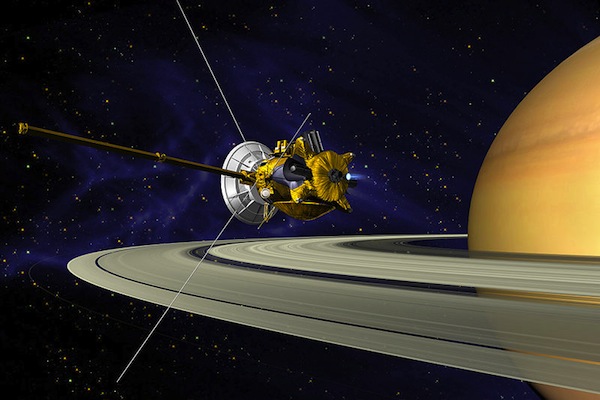 Since that time, the Saturn storm has died down, but at its peak the storm's surface area was over 8 times that of the Earth (We have a video of the storm on NerdBeach). It's enough to make you question travel plans to Saturn anytime soon. But one of the cool things about the storm – it was spotted by an amateur astronomer first, which goes to show that practically anyone can contribute to the ongoing exploration of our galaxy. It is also the subject of one of our favorite space photos for 2011.

Cassini–Huygens is a joint NASA/ESA/ASI spacecraft mission studying the planet Saturn and its many natural satellites since 2004. Launched in 1997 after nearly two decades of gestation, it includes a Saturn orbiter and an atmospheric probe/lander for the moon Titan, although it has also returned data on a wide variety of other things including the Heliosphere, Jupiter, and relativity tests. The Titan probe, Huygens, entered and landed on Titan in 2005. The current end of mission plan is a 2017 Saturn impact.