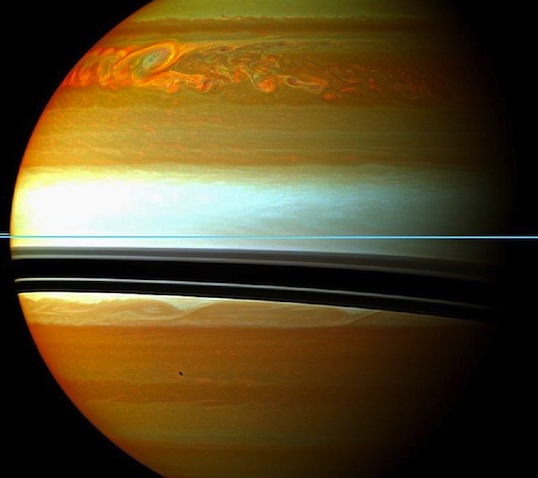 Talk about being in the right place at the right time. Nasa’s Cassini probe was able to capture the complete lifecycle of the biggest storm on Saturn to hit in the last two decades. The storm, which started on Dec 5, 2010 and lasted for 200 active days, completed encircled the planet before running out of steam in late June.

At its peak the storm extended about 9,000 miles on the ringed planet’s northern hemisphere. These storms will show up every few decades, and will appear to be white spots to terrestrial viewers. The last major Saturn storm was in 1990, but that one only lasted for 55 days. Thanks to Cassini, we had a ringside seat to the latest storm. 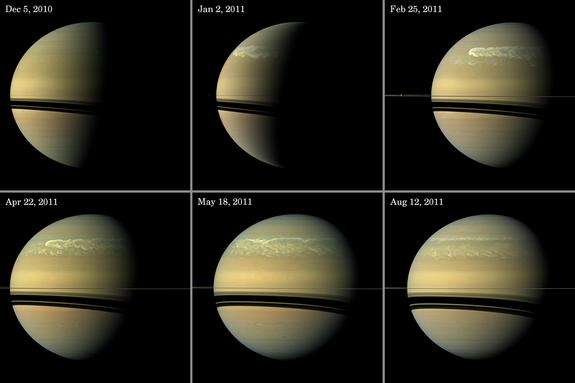 Cassini took up its post around Saturn in 2004, and with a little luck will continue to watch the planet and its moons until 2017. While the next major storm isn’t expected within the lifetime of Cassini, it may still catch another interesting aspect of the ringed wonder, shedding light on the mysteries of at least one of our neighboring planets.
via LiveScience

Titan’s Lakes and Seas Are Connected

Titan and Dione Via Cassini

A Perfect Storm of Turbulent Gases
2011-11-20
This quality page is being brought to you ad free, putting the focus on content. Thank you for visiting NerdBeach!