DIY Charging iPhone Dock Is Made From Paper 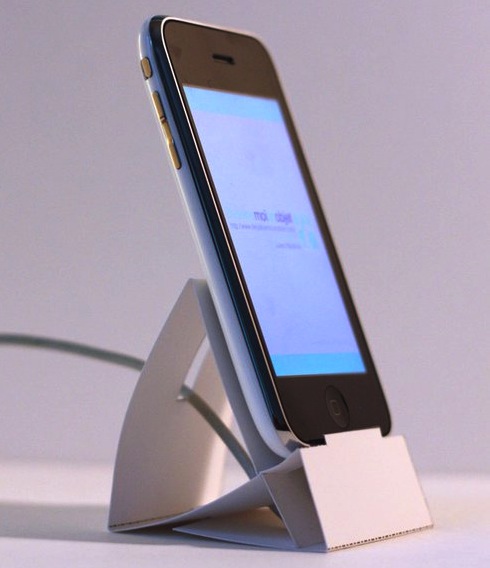 So, you want an iPhone dock, but you really don't want to spend the $30 to buy one yourself – what are you options? Well, if you are French designer Julien Madérou you fold one up out of paper and put it to use. The end product is so handy that he is selling the plans for $5 a pop on Fiverr. The design incorporates the standard USB cord, so your device can charge while it is on the stand.

You will need some fairly heavy paper stock to make the stand from, but the good news is that you can make it any color you want. You could even print out a picture (overlaying the template on the design beforehand) or get creative with the labeling, anything you see fit. But TreeHugger (where I saw this design) will give you kudos if you can repurpose some previously used paper. And that itself could be interesting, especially if that paper has some significance to you. So, those of you with iPhones lying limp on desktops everywhere – what are you waiting on? Download the template and fold up a stand today.

Paper, and the pulp papermaking process, was said to be developed in China during the early 2nd century AD by the Han court eunuch Cai Lun, although the earliest archaeological fragments of paper derive from the 2nd century BC in China.