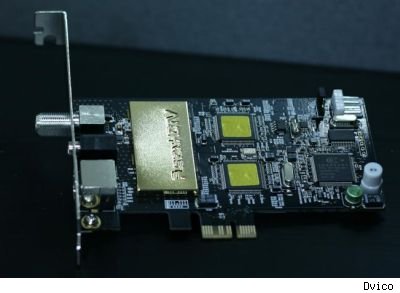 As luck would have it both of the shows I want to record, "Lives of Starfish" and "Navigation in the Ether Sea", comes on at the same time. Even worse, I had plans on doing a nighttime surf reconnaissance mission, so I would have to record them.  "I am certainly lucky the dual tuner HD card washed up recently", I think to myself as I deftly adjust the computer to record both titles. Life on Nerd Beach is good.

Dvico has launched their FusionHDTV7, which they say is "the world's first dual HD (digital or QAM) tuner PCIe card".  The card, which is retailing for $140, brings a great deal of capability to a PC at a very reasonable price. One of the best things about using a computer as you DVR is that the recordings are easily available for network distribution through the home, so any other capable laptops or computers can watch the shows as well. This works great in a wireless setup, and here it allows me to watch recorded shows by the surf.