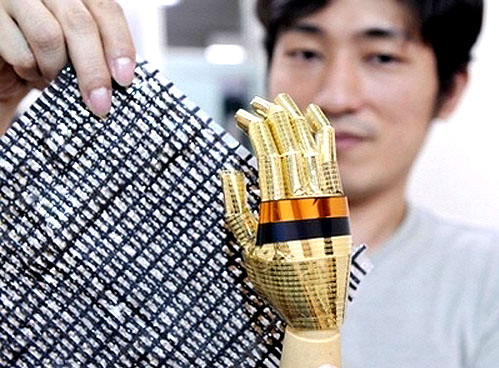 Japanese researchers led by Takao Someya at the University of Tokyo School of Engineering have developed an electricity-conducting robber which could help robots to have skin that can detect heat and pressure, not unlike humans.

The material crosses the gap between rigid non-stretching conducting metals and flexible rubber, and it is more than 570 times more conductive than current carbon embedded conducting rubbers.

The material could be used in the manufacturer of elastic circuits, which could be stretched 1.7 times its original size without any damage or change in conductivity, making extremely durable electronics.

But an ideal application seems to be artificial skin for robotic uses. A research associate on the team, Tsuyoshi Sekitani, said,

As robots enter our everyday life, they need to have sensors everywhere on their bodies like humans. Imagine they bump into babies. Robots need to feel temperatures, heat and pressure like we do to co-exist. Otherwise it would be dangerous.

There are other applications for the material, ranging from driver condition sensing steering wheels to  smart mattresses that prevent bedsores.  Sekitani notes that,

Objects that come into contact with humans are often not square or flat. We believe interfaces between humans and electronics should be soft.

Further down the road, the team sees the material to be useful in many applications, including possible use in living bodies.  But their focus is on the electronic applications for the time being, as Sekitani adds,

We can't rule out the possibility of using this in living bodies but we're sticking to using it in electronics.