The Five in One Kershaw Carabiner Tool 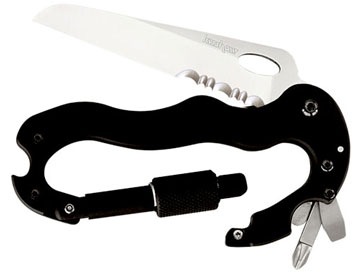 The big crate washes up on the Beach, and I rush to it to see what the Cyber Sea has given out this time.  The case is screwed together, so I pull the carabiner tool from my belt loop and use the screwdriver tip to  open it.  I notice that the case also has plastic binding straps so again I use the carabiner tool, this time the knife blade, to cut the straps.  The case comes apart, and inside I find cases of beer.  Grinning, I reach again for the carabiner tool, knowing that this time I am going to need the Bottle opener tool.

A lot of us have mutli-tools that we carry, from Swiss army knives to credit card tools in our wallet.  The Kershaw Knife Co. has developed a multi-tool that simplifies the carrying in that it is a carabiner that attaches anywhere handy.  The patented five-in-one locking Carabiner Tool  is made from 60601-T6 aircraft aluminum, and features flat and Philips screwdriver, as AUS6A grade serrated knife blade, and a bottle cap opener.  The carabiner is lightweight as well, weighing only 2.7 ounces.  The Carabiner Tool costs $60 and is available from Kershaw Knives.

Milwaukee Hackzall is a handy weapon of destruction