The Future According to Film (InfoGraphic) 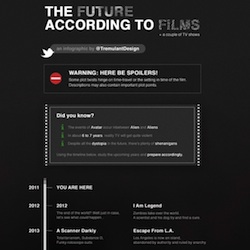 Science Fiction films often paint a glimpse of the future, and they are not always an optimistic viewpoint. In fact, sometimes the dystopian viewpoint is so prevalent among the different film wares that I have to wonder myself what is ahead. Thank goodness for the positive viewpoint of Star Trek.

But it is still fun to look at the future films lay out for us, and the infographic below brings those future glimpses together in a handy timeline. (I'm amazed at how well everything fits together.) Let's hope that a few get it right, and a few never happen…

A dystopia (from Ancient Greek: δυσ-, "bad, ill", and Ancient Greek: τόπος, "place, landscape"; alternatively cacotopia, or anti-utopia) is the idea of a society in a repressive and controlled state, often under the guise of being utopian, as characterized in books like Brave New World and Nineteen Eighty-Four. Dystopian societies feature different kinds of repressive social control systems, various forms of active and passive coercion. Ideas and works about dystopian societies often explore the concept of humans abusing technology and humans individually and collectively coping, or not being able to properly cope with technology that has progressed far more rapidly than humanity's spiritual evolution. Dystopian societies are often imagined as police states, with unlimited power over the citizens