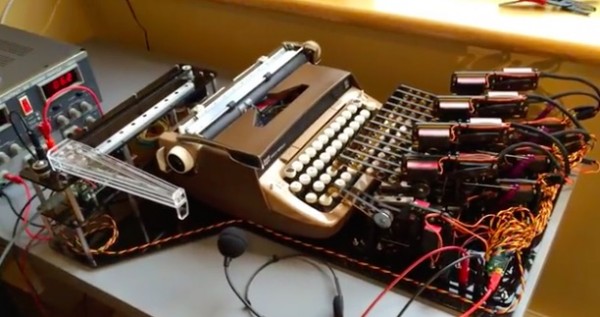 Wouldn’t it be cool if someone was to build a robot to type out requests using a classic Smith Corona typewriter? Well, maybe there aren’t a lot of people that share that particular vision, but at least Youtuber Zip Zaps does. And they built it.

The system uses Microsoft Windows to do the Voice Recognition, which then streams the data out to an Arduino-based control board. From there finger like servos strike the required key, and the rest is like music. There is even a mechanism for hitting the return level.

But does anyone else notice the similarity in the names “Cortana” and “Corona”? Not only is this a fascinating project, but obviously it was synergy just waiting to happen…

Would a Mechanical Typewriter Keyboard Make Your Tablet More Productive?
2016-02-22