A Robot That Can Go Shopping For You 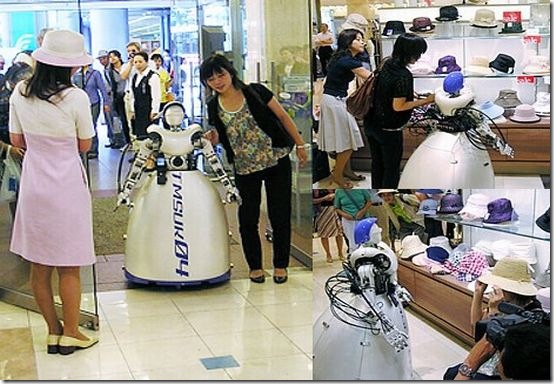 Robots are changing our lives, and one aspect of robotics that is interesting is in telepresence, where you are virtually there thanks to a physical robot that does the action for you remotely.  Already we have surgeons that are virtually in the operating room, and it is the opinion of this author that telepresence robotics will have a very significant impact on our daily lives in the future.

Along those lines,  we have a robot from Japan that is a virtual presence shopper. Basically it is a robot that can go shopping for you while you control it via cellphone.  The robot fights the crowds, digs through the merchandise, pays for it, and brings it home while you stay comfortable at home (or wherever else you happen to be).

The robot is a modified TMSUK-4 humanoid robot that is tied to cellular communications.  The concept of telepresence with a communication device is here referred to as 3D communication, and it is an equally apt label to use.  You could also refer to the device as a telerobotic shopper.

In the demonstration, an aged lady sent the TMSUK-4 robot and her young granddaughter to  a department store in Kitakyushu, Japan. The lady used her NTT DoCoMo video capable cellphone to control the robot and shop through the merchandise. Navigating to the hat section, the robot picked the hats and the granddaughter acted as the hat model.  The lady was then able to select a new hat from the physical store without leaving home.

One aspect of telerobotics that could really drive its acceptance is in its ability to allow the user to manage their time very effectively.  The virtual presence in a lot of the cases requires no travel time, allowing the user to instantly be at the location.  This allows the user to potentially visit many places in a short time (such as a skilled surgeon doing several operations via telerobotics).

Obviously in the case of individual telerobotic ownership, such as the case illustrated above, this would not always be the case, but even then you could do other things while your robotic Doppelganger was en route.

Of course, having a telerobotic device to go the gym for you would not be a good use of the technology, despite the acknowledged short term lack of pain for the user.