Around the World in 90 Minutes 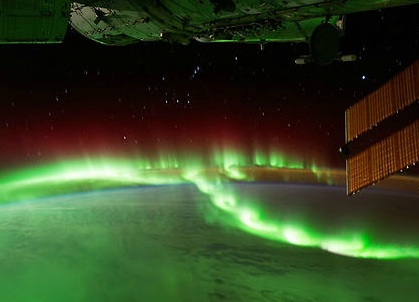 Around the world in 80 days? How about 90 minutes? The astronauts aboard the International Space Station (ISS) do exactly that on an ongoing basis. Recently the crew members aboard the ISS took a series of light sensitive photos, creating the time lapse video shown below.

In the impressive video you can see city lights as the earth spins by, with dancing red and green auroras highlighting the spectacle. the whole scene is framed by the ISS itself, with an occasional solar panel orienting itself towards our sun. Nice!

The International Space Station (ISS) is a habitable, artificial satellite in low Earth orbit. The ISS follows the Salyut, Almaz, Cosmos, Skylab, and Mir space stations, as the 11th space station launched, not including the Genesis I and II prototypes. The ISS serves as a research laboratory that has a microgravity environment in which crews conduct experiments in many fields including biology, human biology, physics, astronomy and meteorology. The station has a unique environment for the testing of the spacecraft systems that will be required for missions to the Moon and Mars. The station is expected to remain in operation until at least 2020, and potentially to 2028

Out of this World PDA/Camera Case (Literally)