Atlas, The Next Version Of The Boston Dynamics Robot 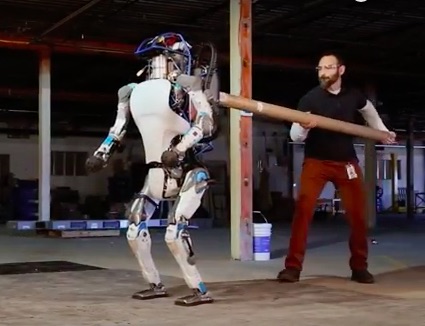 Boston Dynamics continues to improve on its two legged robotic wonders, and the latest version of Atlas does not disappoint. Atlas can not only carry boxes and transverse varying terrain, it can also get back up again in case it falls (or, as shown above, is attacked by backstabbing coworkers with large cardboard tubes).

Atlas is electrically powered and hydraulically actuated. It uses sensors in its body and legs to help achieve balance, and incorporates LIDAR and stereo sensors for most of its local navigation. Atlas stands about 5′ 9″ tall, and weighs in at a mere 180 pounds.

Atlas is designed to be mobile in both outdoor and indoor settings. Let’s face it – this probably means that there is no escaping Atlas if it has your number. At least you can knock it over and escape while it is busy becoming erect again – for now. Just imagine what the next version will be capable of doing.

And Now, The Atlas Robot With An Emotion Chip