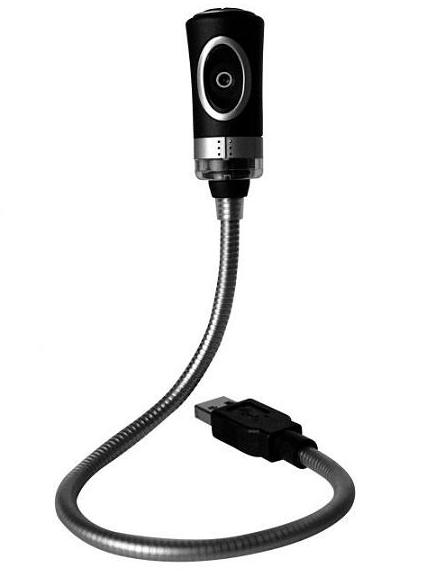 The ideal of a liquid lens to replace glass lenses is not new, and have been used in a static mode (non-focusing) for some time.  Even in some projection televisions you will often find a liquid lens, and some reflector telescopes use a mercury based liquid lens.  However, to have a liquid lens that changes shape when you apply an electric charge is pretty cool.

The concept is that the lens could focus faster than a mechanical glass lens since there are no moving parts outside of the lens itself – there are no mechanisms needed to move the glass to a new focal point.   Instead electricity would focus the lens as required, and a feedback system coupled to a microprocessor could fine tune the adjustment to a fine degree.

Not only could it be faster, but the technology could also be cheaper.  The need for a highly processed and polished glass lens is removed, since the liquid itself acts as the lens.  Also removed is the need for the focusing mechanism which would physically move the glass.  Faster AND cheaper – they could be on to something here.

The technology is not just theory, it is already trickling out in products found on the market.  The Akkord SnakeCam, a webcam sold in China, incorporates just such technology. Recent testing has shown that the SnakeCam can indeed focus quickly and dynamically (even if it lacks the overall streaming speed of a higher priced webcam).

With the fact that dynamically focusing liquid lenses are already available on lower priced web cams, it seems that there may be such technology in everyone's future at some point.  I can see it easily being incorporated in such items as camera phones and "point and shoot" video cameras in the near future.  In other words, a lot of the places where fixed lenses are currently being used.

In the Philips dynamic liquid lens, called Fluid Focus,  a conductive fluid is combined with an insulating fluid.  These fluids, which do mix (think oil and water, for example) are then shaped by electric current.

Before electric current is applied, the lens is in its natural shape as determined by surface tension of the liquid 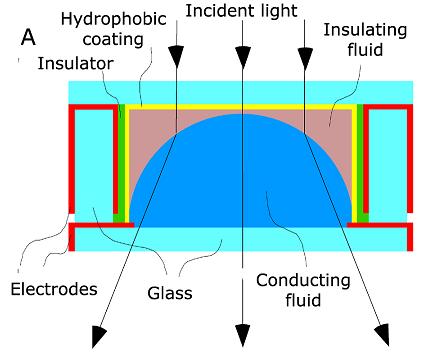 After current is applied.  Note that the light rays are now being influenced differently by the new shape. 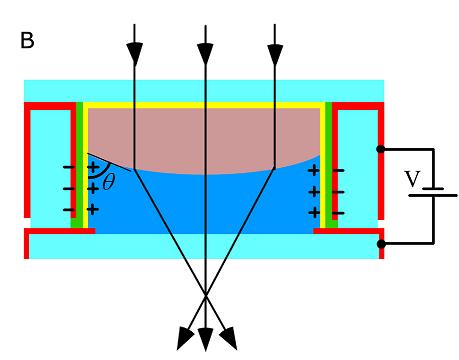