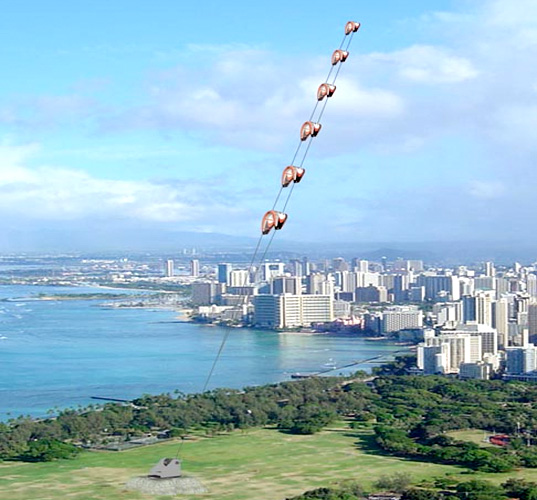 Giant wind turbines are in the news a lot these days, and they are a relatively effective way to gather energy from the wind. But giant kites, which man has used to extract power existed before the turbines existed, could prove to be an effective means of gathering energy as well.  The kites have a small footprint, and a series of kites could generate enough energy to power 10,000 homes.

Scientists from Delft University of Technology in the Netherlands have harnessed energy from the wind by flying a 10-sq meter kite tethered to a generator, producing 10 kilowatts of power. The expanded project, called Laddermill, hopes to increase that to 100 megawatts of power. Wubbo Ockels, a professor of sustainable engineering and former astronaut leading the Laddermill project, said,

We need to use all the energy supplies that are offered to us by nature, we need diversity and kites are … intriguing and fascinating

One of the hopes of the project is to get the kites up about 800 meters, where it can start taking advantage of the prevailing winds and the effects of the Jet Stream.  Conventional structures are make it not practical to attempt this, but kites can reach those heights without much effort.  This allows the kites to use the JetStream as an Alternative Energy source.

I hate to say it, but watching kites fly and swing about without having any solid control on them sometimes freaks me out, but with a pseudo steady wind such as the jet stream pushing them I would imagine that the kites could be held aloft without much concern.  Just don't put too many of them close together – imagine untangling those lines.  But this does seem to be a fascinating project,  with a huge potential payoff.