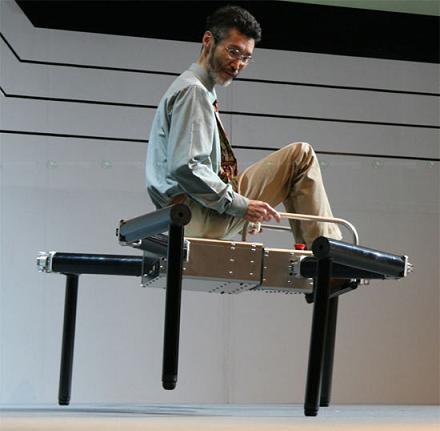 To say that Robo Japan 2008 had a lot of robotic things on display would probably be an understatement. There were plenty of robots to choose from and gaze upon, but one thing that caught our eye was the walking machine shown here.  The rider appears to be quite at ease while the spider looking device does the walking for him.  Of course, it is probably incorrect to say spider since there are only four legs, but you get the idea.

The quadrapedal platform apparently uses a shifting tripod approach to movement, in that three legs support the rider while the fourth legs is being positioned.  While I would expect some jostling with this setup, the rider looks to be quite relaxed (although I cannot tell from the photo if he has white knuckles or not).

The walking platform shown is a bit rudimentary in its approach, since there is apparently no knee joint action or other lifting mechanism.  That is, it could probably not climb over obstacles or go up stairs.  Unfortunately there is no additional information at this time about the walking platform, but it is cool to see.

Using legs instead of wheels could give wheelchairs and other modes of transportation greater movement abilities.  For example, you could traverse stairs and step over obstacles.   At some point even climbing otherwise unusable paths might be possible.  Now, unless the legs could move really fast you probably would not move as fast as you could with standard wheels, but that is true today with people walking versus riders on bicycles.

At some point I fully expect to see walking people transportation devices, and no doubt they will be commonplace.  But isn't it exciting to be at the forefront, as these creations start to spring into being?  Of course, that may mean you have to wait for your own.