Venturi Volage is an impressive all electric sportscar 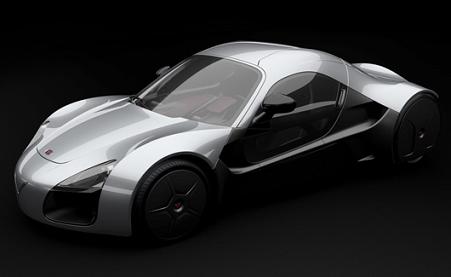 The 2008 Paris Motor Show was no doubt a blast to take in, but one of the headliners was the Venturi Volage vehicle.  The Volage is a completely electric car that boasts some serious power, so to say.  The vehicle sports 295 horsepower along with 171 Pound-feet of torque.  This gives the electric sportscar a 0-60 time of less than 5 seconds.

The suspension on the two seater vehicle is unique as well, incorporating something that Michelin calls Active Wheel Technology.  The concept is that the entire suspension and drivetrain  fits as much as possible within the wheel envelope.  In this case two motors at each wheel provides for both suspension and moving the vehicle.  This gives the vehicle not only an active suspension, but since each wheel has its own motor the car has the ability to incorporate some advance control techniques.  The torque of the drive motors are rated at 232 Nm (4 x 58 Nm), with a max power rating of 55 kW.  Each motor uses liquid cooling to keep it responsive.

With the motors at each wheel, the chassis itself can be lightened up and minimized.  The Volage takes advantage of this and incorporates a lightweight carbon-fiber chassis that comes in at only 2,369 pounds.  The light weight helps with the top speed, which is rated at a very brisk (to say the least) 200 miles per hour.

The lighter chassis weight also helps with the range the car gets on a single charge.  In its current configuration the Volage gets a respectable 200 miles per charge.   No doubt this number will vary depending on how you drive the vehicle (and the temptation to be a bit lead footed would no doubt be strong), but that should be a fair average.

The battery technology on the vehicle is  Polymer Lithium Ion, an advanced version of the typical lithium ion battery.  The batteries can produce a satisfying 45 kwh, and weigh in at 350 pounds.  The battery set is rated for over 1500 charging cycles, so they should provide a lot of fun time behind the wheel before needing replacing.  Heat from the battery set is handled by a liquid cooling system.

The Venturi Voltage is currently planned for production in 2012.  The price is not known at this point, but expect it to be, for lack of a better word, a bit expensive.

The Difference between Lithium-ion Polymer and Lithium-Ion batteries