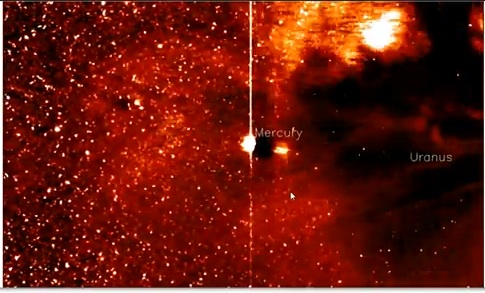 NASA's STEREO spacecraft was going about is business, capturing a video of Mecury being blasted by a coronal mass ejection from the sun. While this is in itself a fascinating piece of video, YouTube user siniXster discovered something more than meets the eye – a giant "UFO" was captured when the waves washed over it. The video follows:

The video definitely seems to show something that reacts to the plasma burst, illuminating it from seemingly invisibility. According to siniXster,

It's cylindrical on either side and has a shape in the middle. It definitely looks like a ship to me, and very obviously, it's cloaked… What object in space cloaks itself and doesn't appear until it gets hit by energy from the sun?

The question was put to scientists at the United States Naval Research Laboratory (NRL), the group that analyses the data from the Heliospheric Imager-1 that took the picture. According to them, the images are simply an artifact from the way they process the data. The planet's position from the previous day is used to mask the image, and any background light from other sources must be removed to make it a visible image. The mysterious image is simply a negative artifact from that process. 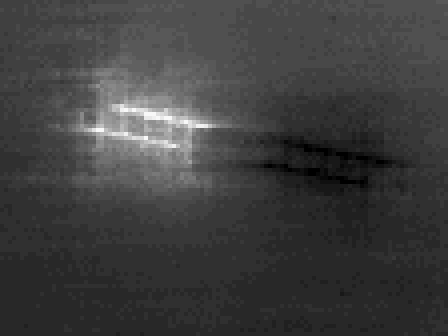 The problem with that explanation is that the image is not round, but instead has sharp images like you would expect from something mnufactured. However, researchers point out that this would be the effect from artifacts over the course of several days. Nathan Rich, lead ground systems engineer at NRL, sums it up,

So, the shape does make sense, and there is a plausible explanation for it. You can weigh the evidence for yourself, but it does point out one thing – having extra eyes on the huge amount of data we receive almost daily from outer space may help in catching something that would otherwise be missed. This makes even the most casual space enthusiast a very important part of our search for intelligent life in the universe.