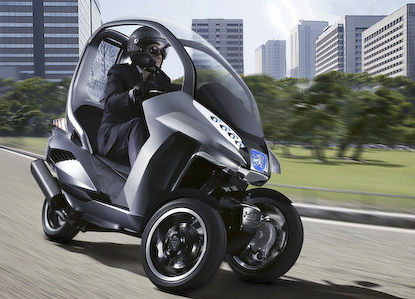 More and more small three wheel vehicles are showing up when efficiency is a major concern, and for good reason – there are less wheels to drive, yet the vehicle remains upright when unattended.  So it makes sense that  Peugeot would look to that platform when designing a fuel efficient all weather runabout.  Their fun looking vehicle with a large moniker, the HYmotion3 Compressor Concept, is a hybrid in that is uses both gas and electric to drive it.

In low speed mode the vehicle can be ran in all electric mode.  Dual mounted, in the wheel motors up front can each generate up to four horsepower of pulling power.  But when more energy is needed the central power source is a supercharged 125 engine producing 20 horsepower.  When the onboard power plants are totaled up the trike has the same power equivalent to a 400cc motorcycle.

But there are more technological goodies in the drivetrain than just the hybrid configuration.  The vehicle incorporates regenerative braking to recover some of that expended energy (told you it was an efficient design).  There is also a stop-start engine function and a mileage boost mode that can allow the vehicle to eek out up to 118 mpg.

Some of the Peugeot group’s Citroën models are fitted with the “Stop & Start” system, which switches the engine to standby mode when the vehicle is at a standstill and then restarts it automatically. Fuel consumption can be reduced by as much as 15% in city driving. The Group plans to make this technology a standard feature by 2011, equipping more than one million Peugeot and Citroën vehicles Europe with “Stop & Start”

The vehicle design itself is a cross between a car and a scooter, designed for a single passenger.  Since Peugeot is one of the largest scooter makers in Europe they are obviously using their experience with such utility vehicles in the HYmotion3 design, and this could make the vehicle very handy indeed.  It could be described as a stable Smart Car Trike, safety cell included.

I am a bit curious as to the all weather claim while it lacks weather protection for the occupant, but I can only assume they are referring to the vehicle and not the act of transportation itself.   In other words, you could probably hose the vehicle off when it needed cleaning.

At this point it is a concept vehicle, not yet manufactured for mass consumption.  But given the vehicle’s pedigree I would not be surprised to see it, or something very similar, on the road in the near future.  One thing does seem to be certain – three wheel vehicles, in one form or the other, is probably going to be a common place staple in the near future.