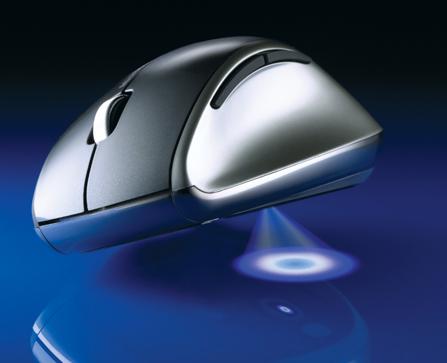 Using an optical mouse, as compared to the old ball driven units, is a joy to behold, but only if you have suffered from using the older mice.  Yes, there is no fuzz, thread, bits of paper, or even indescribable bits of black stuff to contend with when popping out the ball to clean it.  However, there are some instances where the old ball type is actually better.  Now, there are very few places where this is true, such as a shiny table top, and if the new Microsoft Explorer mouse lives up to its name there may be a lot fewer exceptions to the optical mouse superiority title.

Instead of a ball physically rolling on a surface, an optical mouse uses a light source, typically a red LED or laser, to light up a surface.  The mouse then takes a picture, and analyzes it for any number of tiny shadow bumps cast by very slight surface imperfections.  This process is done quite quickly, and when you move the mouse, a process compares the shadows to determine what direction you are moving the unit.

While the process works great on most surfaces, it does have its weaknesses.  If it is an extremely smooth surface with little imperfections for shadow creation (shiny), or if the surface is varied with gaps that let the light pass through without any reflection (carpet), then there are simply no shadows to compare, and the mouse is convinced that it has not been moved.

The first known publication of the term "mouse" as a pointing device is in Bill English's 1965 publication "Computer-Aided Display Control".
source:wikipedia

Microsoft's Explorer mouse addresses this by moving the camera sensor forward to capture not only the light the mouse emits but also light reflected by any part of the surface. The new position also allows the mouse optical sensor to take a wider picture of the subject area, increasing the chances of a good "read".

Unlike other optical mice that typically incorporate a red LED, the Microsoft Explorer mouse uses a distinct blue LED source which runs through a diffuser, allowing it to shine wider and more even than the other light sources.  This also increases the odds that the mouse can grab those all important diminutive surface imperfection shadows.

Of course, the mouse tech sounds impressive on paper, but how it works in the real world is the true determination of its practical worth. PopSci did a test on the Microsoft Explorer mouse, and the results were quite good.  From their website:

The Explorer did better than promised. It worked not only on plush rugs and angry pets, but also on clear glass, one of the two surfaces Microsoft says it can’t handle. (It even tracked sometimes on the other near-impossible surface, a mirror.)

So, does this mean that the mechanical ball mouse has finally met its demise?  Well, unless you really want or need to use your mouse on a mirrored surface, the writing is definitely on the wall, especially when the technology spreads to cheaper mouse units (the Explorer retails for around $100).  Until then, if you are one of the dwindling number that use an old style mouse, enjoy cleaning out the fuzz while you can.

Oahu may be consumer version of Microsoft Surface