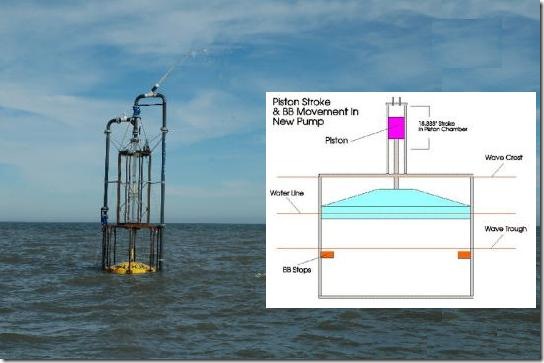 We recently talked about Wind Turbines being parked at sea in order to collect wind power.  Of course, there are other ways to collect energy while at sea, including from the sea itself, and the Sea Dog pump from Independent Natural Resources (INR) is a great example of wave power generation. The pump uses wave motion to drive a piston, collecting the water and forcing it through an exhaust pipe. From there it could be used to drive a turbine, generating energy  through a power generator.

The inherit beauty of the renewable energy power process is that it is a purely mechanical process, and it can be built to be very durable.  This would mean that it could potentially survive continued salt water exposure, wave pounding, and the occasional storm without too much damage.

Harnessing ocean power is a new but potentially explosive field of alternative energy, and there are efforts being created to explore its use. INR has plans to create an 18 pump installation in the Gulf of Mexico to desalinate seawater (which is an energy intense process),  and another company called Marine Current Technologies is slated to bring a 1.2 megawatt installation to Ireland.  One thing seems certain, the act of capturing wave motion and converting it to useable energy is an area that should be explored a great deal more in the coming years.