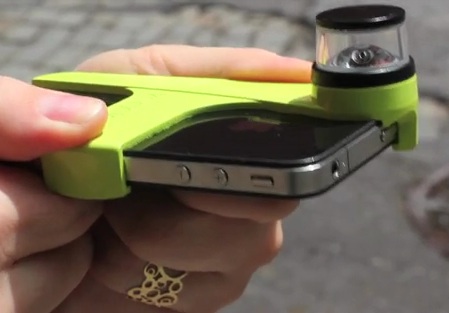 We can all agree that the iPhone 4 and iPhone 4S have a great video capability, and ithe auto focus and great light sensitivity makes it very easy to use. But did you now that it could grab 360 degree videos just as easy? You can, if you have Dot.

Dot is a mechanical device that is designed to hook to your iPhone and provides a small dome shaped mirror for grabbing the video. You snap it on, turn the iPhone flat, and start grabbing everything around you. A dedicated app processes the raw dome shaped video into a 360 degree panoramic that allow you to pan and move while the video plays. Simple and effective – how cool is that?

This capability really allows the user to share everything that was going on around the user at a given time. You can even revisit taken videos and see what was happening beside or behind you as needed. I think this is a great idea, and puts a whole new spin on the VR pictures you can find on the web now, but puts the power in your own hands.

The Dot Project is a Kickstarter project, and a pledge of $99 gets you the Dot device, the app, an invitation to the launch party, and even a hug when it launches in 2012. I am actually excited about Dot, and would love to see such capabilities built into a future device. If included by Apple, it could be as simple as a small bump on the top of an iPhone. But in the meanwhile, this should be a great way to share videos with anyone. Who knows, maybe you and a friend can explore a place together, since you may have missed something the first time around.

Kickstarter is an online threshold pledge system for funding creative projects. Kickstarter has funded a diverse array of endeavors, ranging from indie film and music to journalism, solar energy technology and food-related projects.