Use Airplay Mirroring With Almost Any Mac 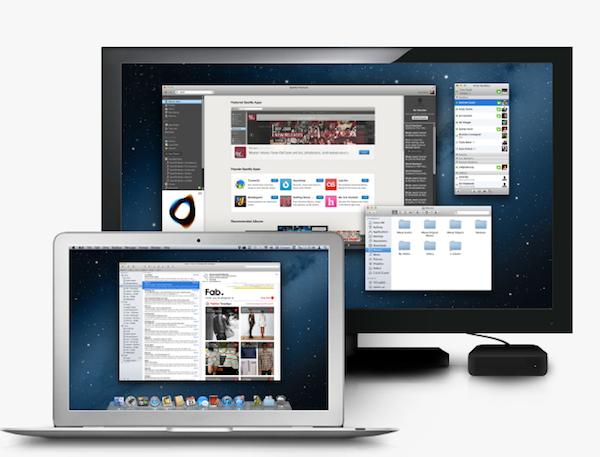 When Mountain Lion launched, one of the “cool features” was the ability to mirror the output of the Mac in question to another screen through the use of AirPlay (no wires!). It was pretty sweet to throw those videos and presentations up on the HD screen, simple if you happened to have an Apple TV or XBMC handy.

However, the fun times are limited to users of 2011+ Macs. The reason is simple, and it is not an attempt on Apple’s part to force everyone to buy new hardware. You see, the later Macs have a hardware H.264 encoder, allowing the streaming to happen without sweating the machine. And Apple doesn’t like to see its latest gee-whiz features making its Macs sweat.

But if you do own a pre-mid 2011 Mac, there is a solution, The app AirParrot, which will set you back $10, allows you to do virtually the same thing as Airplay mirroring, but with practically any Mac. There is a timed demo, so you can try it before buying. Now, I have to warn you, without the hardware encoder things are going to run a bit warmer. But in testing the app with an older 2009 Macbook Pro, I found it to be quite manageable.

In fact, AirParrot gives you the option to use the HD screen as a secondary screen, just like an extended monitor. This is great, since it allows you to manage what is on the big screen. You can also select only certain apps to be on the other screen, making it really handy for presentations and other forms of entertainment.

AirPlay (previously called AirTunes when it was for audio only) is a proprietary protocol stack/suite developed by Apple Inc. that allows wireless streaming of audio, video, and photos, together with related metadata between devices. Originally only implemented in Apple’s software and devices, Apple has licensed the audio-streaming portion of the AirPlay protocol stack as a third-party software component technology to manufacturer partners for them to use in their products in order to be compatible with Apple’s iDevices.

iOS Over The Air Update Is A Welcome Change

Thanks to Mountain Lion, Save As is Back