Use Your Smartphone to Combat Credit Card Skimmers 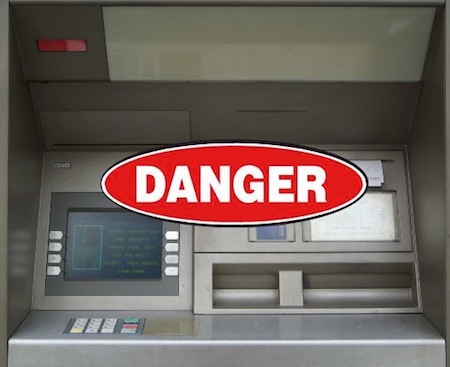 For most people, the proliferation of ATM machines has been a boon to many activities. The convenient corner or quick mart ATM machine is a popular place for many of us to do our minor withdraws. In fact, you can find thousands of these machines across the globe, all designed to put your money in your hands when its most convenient and needed by you.

But it should not be surprising that a machine that dispenses money at random times throughout the day is going to attract attention from thieves. In these technological advanced times, those who would like to separate you from your money have found new and interesting ways to use these machines as a means to do just that. Their tool of choice to do that? A credit card skimmer.

The credit card skimmer is designed to fit onto a normal ATM machine and appear to be part of the unit itself. These devices use various means to get your account information, from cameras that take pictures as you insert the cards to actually swiping your card directly as you attempt to use it. And the polish put on these devices have become almost professional in quality, taking a trained eye to see the difference. 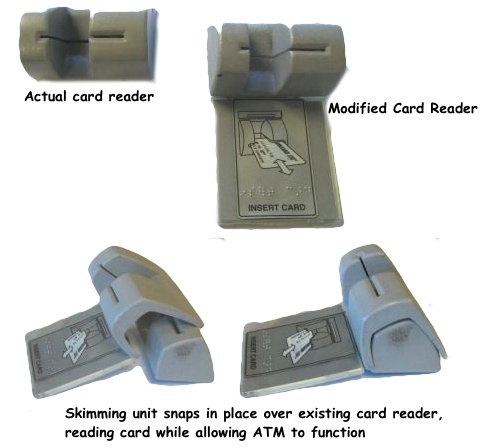 The skimming device is oftern colored and molded to fit the ATM model in question almost exactly. The self contained device is usually placed on an unsuspecting machine during off hours, and left to collect information when the ATM is in use. After a few days, the device is covertly removed, and the ATM continues to function as normal.

So how could your smartphone help you avoid a credit card skimmer? Simple enough – by taking a picture. A lot of people tend to use the same ATM machines, and this works in your favor. By taking a picture of an ATM on a previously known good visit, you have a handy reference of what equipment should be in place.

On your next ATM trip, pull up the picture and compare it with what is in front of you now. If you notice new panels, a new swipe unit, or even a rectangular box mounted to the front of the machine that seems out of place in comparison to the picture, be cautious. Such front mounted panels are often a perfect place to put a pinhole camera, conveniently taking a picture of your debit card as you go to swipe it. Also look around the ATM machine itself, since a new retail display beside the machine could be a plant for a camera.

If you suspect the machine due to changes in the picture, don't use it but do snap a picture. If it is in a quick mart or similar, bring to their attention but avoid usage for now. Hopefully you have several ATM machines close to you, and go on to the next one that you can validate unchanged thanks to your picture.

After a few days, if the suspect ATM has not changed then you can probably put it back on the trusted list. This same process can be used for ATM machines in a new area. Just snap a picture, and watch it for a few days. If nothing changes, then you are PROBABLY okay. But still take time to do a visual check and make sure that nothing appears fishy with the swipe unit, and do a search for any potential pinhole cameras in the area that could get a card image.

With a little diligence and the pixel perfect memory of a digital picture, you can avoid suspicious ATM machines that may have been compromised with a credit card skimmer. This in the end could save you a lot of money and save you from potential identity theft. Just one more way how a smartphone may be smarter than you realize.

The process of attaching a magnetic stripe to a plastic card was invented by IBM in 1960 under a contract with the US government for a security system. Forrest Parry, an IBM Engineer, had the idea of securing a piece of magnetic tape, the predominant storage medium at the time, to a plastic card base. He became frustrated because every adhesive he tried produced unacceptable results. The tape strip either warped or its characteristics were affected by the adhesive, rendering the tape strip unusable. After a frustrating day in the laboratory, trying to get the right adhesive, he came home with several pieces of magnetic tape and several plastic cards. As he walked in the door at home, his wife Dorothea was ironing and watching TV. She immediately saw the frustration on his face and asked what was wrong. He explained the source of his frustration: inability to get the tape to "stick" to the plastic in a way that would work. She said, "Here, let me try the iron." She did and the problem was solved. The heat of the iron was just high enough to bond the tape to the card