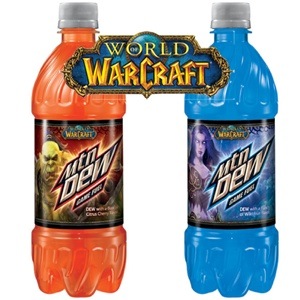 Nothing goes together better than gaming and Mountain Dew.  Now, that is not just my opinion, that is a scientific fact (from a round of studies that I have happened to have conducted myself).  Okay, so maybe it is not exactly a scientific fact, but in my opinion it is a great fit.

Apparently the folks at Mountain Dew and Warcraft agree, since they have teamed up to offer a special blend of game fuel just for  people who drink.  The new flavors are Citrus Cherry and Wild Fruit, and not only are they no doubt tasty, they are also quite colorful.

To celebrate the joint adventure, Mountain Dew and Warcraft have set up a website that is giving away some serious swag.  From Alienware Notebooks (the premier gaming laptop, and a new one every day) to Razor headsets (seven each and every day), the merchandise on this promotion is sweet.

Now a little tip for Nerd Beach readers – Every token you enter is a shot at prizes, but if you use this link – MountainDewGamingWOW – you get an additional 100 tokens through our friends at Mountain Dew.  You could start winning from the word go, and come back for more.  Once you register and log in, you spend your tokens on shots at winning the gear, which comes up several times an hour.  Spend your tokens well, and be victorious (but I gotta tell you now, I am aiming for the Alienware Laptop as we speak…)

Also, if you have not seen it already, check out the commercial.  Really cool, especially if you are into fantasy books, Tolkien, WoW, or generally just carry weapons when you grocery shop (to each their own, I try not to judge).

World of Warcraft, often referred to as WoW, is a massively multiplayer online role-playing game (MMORPG) by Blizzard Entertainment. It is the fourth released game set in the fantasy Warcraft universe, which was first introduced by Warcraft: Orcs & Humans in 1994. World of Warcraft takes place within the Warcraft world of Azeroth, two years after the events at the conclusion of Blizzard's previous Warcraft release, Warcraft III: The Frozen Throne. Blizzard Entertainment announced World of Warcraft on September 2, 2001. The game was released on November 23, 2004, celebrating the 10th anniversary of the Warcraft franchise.

With more than 11.5 million monthly subscribers, World of Warcraft is currently the world's largest MMORPG in those terms, and holds the Guinness World Record for the most popular MMORPG. In April 2008, World of Warcraft was estimated to hold 62% of the massively multiplayer online game (MMOG) market.

The Votes Are In – Mountain Dew Voltage it is, and with Free Stuff