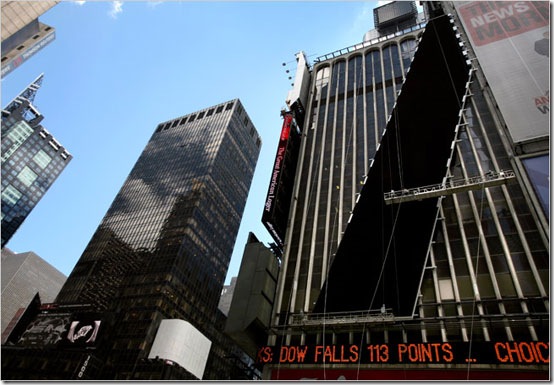 While Dubai may have the world's tallest building, New York is getting the world's largest LED Billboard. The monstrous billboard stands 212 feet tall, and it incorporates 12 million LEDs. A bit of engineering went into the huge outdoor LED sign mounting, since it weighs in at over 250,000 pounds and wraps the former Times Tower.

Walgreen is behind the 43,720 square foot mammoth monolith, and both the LED display and the store is slated to activate next fall.  Walgreen estimates that 1.6 million passers-by daily will see the sign.  Now if only this vast power could be used for good instead of outdoor advertising.

Since this article was posted, the giant billboard has gone live (November 22, 2008).  At that point, we have a video of the sign in action from a local news station, see below.  Perfect for my needs…

The Burj Dubai is Now the World’s Tallest Building