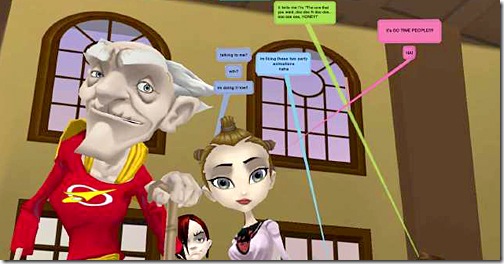 Online virtual worlds are becoming more popular and bigger business all the time, with investments from major players exceeding $1 billion.  This kind of investments no doubt expects big paybacks, and so it should be no surprise that Google has launched their own virtual piece of the universe.

Called Lively, the virtual world allows users to create a virtual self and explore their surroundings, all the while potentially meeting and interacting with other players.  Unlike some of the other virtual worlds, Lively has several unique things going for it.

One, it is from Google, a trusted name with instant recognition.

Two, it does not require a software install, but rather runs with a simple plugin to a browser.

Three, it is free.  This could attract a lot of users, especially in the current economy.

Four, Lively incorporates other Google services, such as using YouTube videos in their virtual personal living rooms and use their Picasa pictures on their virtual walls.

Five, Lively does not require a specific point of entry. Instead users can enter the virtual world straight from their blog or social network.

With that kind of advantage it will be interesting to see how the other virtual world players handle this new challenge. According to Niniane Wang, an engineering manager at Google:

Of course, there are some things that Google's Lively does not do well that the others offer.  A lot of today's virtual worlds are aimed at youth, and Lively is not designed for kids.  Also popular is using a virtual space to host a company meeting, something that surprisingly Lively is not offering.

Time will tell how Google's attempt to compete in the virtual world will play out, but it does seem certain that online virtual worlds are here to stay as part of the computer social mainstream.