Technology Blocks Driver’s Use of Smartphone 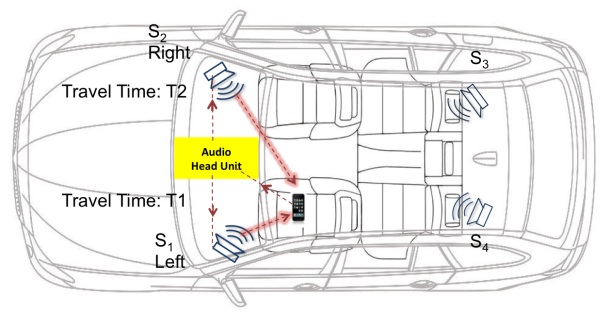 The system would use a Bluetooth connection and the car stero to determine smartphone position (Credit: Stevens Institute of Technology)

Researchers at Stevens Institute of Technology have developed a method of limiting the driver's use of a smartphone in a vehicle while not affecting that of the passengers. The system uses hardware already equipped in most vehicles, making it a solution that automotive manufacturers could find attractive.

The solution uses the car stereo system to emit a series of high-frequency pitches that the smartphone would pick up and measure, and compare these against a Bluetooth connection to the same unit. The smartphone can then use this information to triangulate its position in the vehicle's cabin. If it maps the location to the driver's seat, the device can limit service.

There are some limitations, including a need for the driver's phone to be paired with the car and for the car's speakers to be functioning. But so far testing has shown it to be over 95 percent effective, with some holders dropping that to around 80 percent. The system has merits over other solutions: it is much more effective than a program relying on GPS to track movement, it is easier on the phone's battery than running a GPS chip, and it does not impact others in the vehicle. In other words, it sounds good so far.

In trigonometry and geometry, triangulation is the process of determining the location of a point by measuring angles to it from known points at either end of a fixed baseline, rather than measuring distances to the point directly (trilateration). The point can then be fixed as the third point of a triangle with one known side and two known angles.