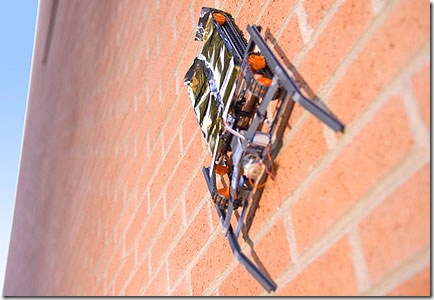 Spider Bot, Spider Bot. Does whatever a Spider bot can.

Far from just creative writing, the wall climbing robot is a reality.  This device, designed by non-profit group SRI International, uses electroadhesion to to stick to the wall.  If you are anxious to see it for real, you may have to wait until the unveiling at the International Conference of Robotics and Automation.  Until then, the closest you are going to come is a video of it at  Popular Mechanics.

If you are not familiar with electroadhesion, that is the electrostatic effect used now to pick up silicon wafers on assembly lines, keep paper on plotter surfaces, and apparently robots stuck to walls.  Now you know why the big treads  look rather like foil.

Imagine the security that can be had by a swarm of these in a typical building, watching from every nook and cranny (literally).  Given the nature of electrostatics it will be interesting to see how they manage the power to weight ratio for a decent runtime, but they do have it running.  Cool stuff.

You Can Have Your Own Wall-E