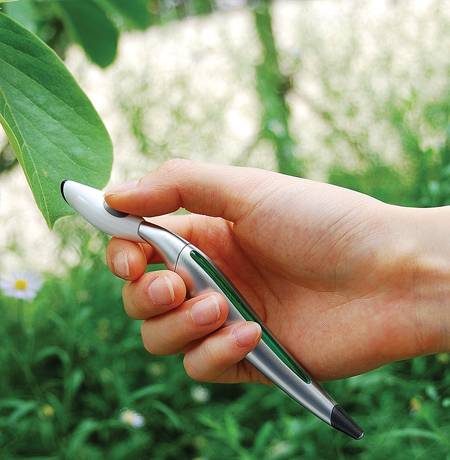 Remember those multi-selectable ink pens that allowed you to write in 12 different colors? Well, this concept pen takes that idea into the 21st century. The concept pen, designed by Jinsun Park, uses a small color sensor and RGB ink cartridges to custom mix the ink to match the detected color. The pen even uses a long side display to indicate the detected color.

To use the pen, the user would simply point the color sensing head to the desired color on the object of choice and press the scan button. Once processed (which should happen very quickly), the side display would indicate the selected color, and the pen would be ready for use. 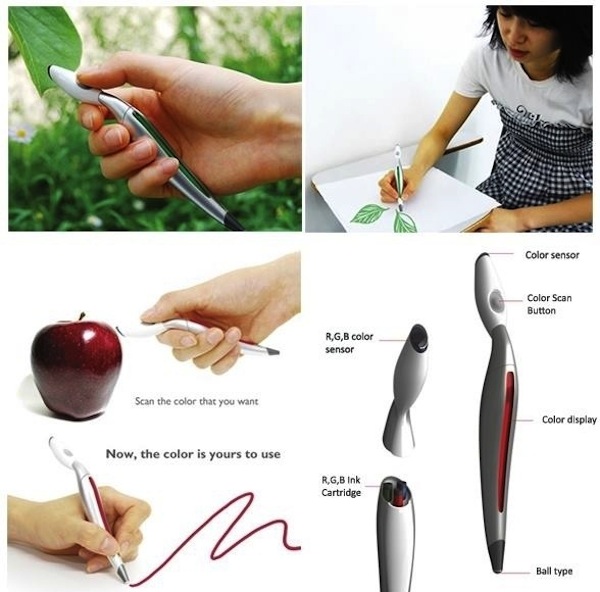 I don't know the possibility of the concept pen ever becoming reality, but it would certainly be a very handy pen to have for any number of tasks. You could finally throw out that really big box of crayons for one color pen (and a box of RGB refills, no doubt).

The first patent on a ballpoint pen was issued on October 30, 1888, to John J Loud. In 1938, László Bíró, a Hungarian newspaper editor, with the help of his brother George, a chemist, began to work on designing new types of pens including one with a tiny ball in its tip that was free to turn in a socket. As the pen moved along the paper, the ball rotated, picking up ink from the ink cartridge and leaving it on the paper. Bíró filed a British patent on June 15, 1938. In 1940 the Bíró brothers and a friend, Juan Jorge Meyne, moved to Argentina fleeing Nazi Germany and on June 10, filed another patent, and formed Bíró Pens of Argentina. By the summer of 1943 the first commercial models were available.

This quality page is being brought to you ad free, putting the focus on content. Thank you for visiting NerdBeach!